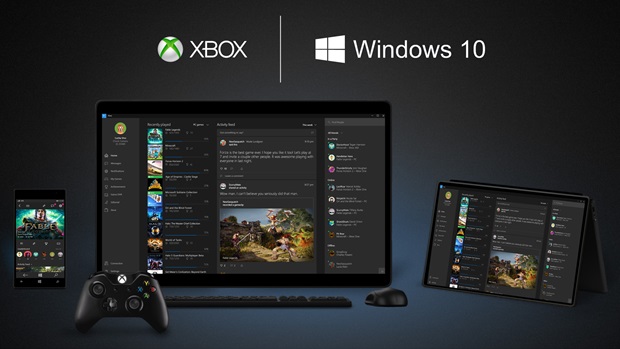 Have you ever wanted to be able to play your favorite Xbox One games directly on your PC? Console exclusives got you down and feel like you still need to be able to use your PC? With the official release of Windows 10 now upon us, you can now play all of your Xbox One games on your Windows 10 PC through the new Xbox app that’s available through the Windows 10 App Store. This feature is pretty cool, albeit is a bit dependent on the quality of your home networking setup.

The PC and Xbox One finally meet

The latest generation of consoles have been playing some catch up with a lot of the PC games lately. There’s still something great to say about being able to just sit back on the couch and play a game on what is likely the largest screen in the house though. For those that typically spend the majority of their time at their computers though, being able to seamlessly switch from your PC to your Xbox at the click of a button is pretty fantastic. The Xbox app lets you manage your PC games as well (similar to adding a non-Steam game to your Steam library for instance). There are other neat features with it that I’ll go over in this post as well. So what exactly is this Xbox app that I keep bringing up anyway? Similar to Xbox Smartglass, it allows you to control your Xbox One remotely on your Windows 10 PC. Instead of being essentially a remote control for your Xbox One, however, the Xbox App can be an extension of the console itself. I would shy away from saying a replacement as it still requires you to have an Xbox One connected to your network to work. Once you pair the app to your Xbox One, you’ll be able to do pretty much everything you do from your Xbox One on your PC. The only requirement is to have your Xbox One on your network.

Among some of the features of the Xbox app are the ability to see updates on when friends are online, as well as when they start broadcasting their games live on Twitch TV. You can send messages to your friends, check out your achievements, and many more. As mentioned before, the Xbox app also lets you manage your local PC games as well. This enables a few features for the games also. The Xbox app comes with a built-in game recorder, similar to Nvidia ShadowPlay. It allows you to use the same functionality that the Xbox One’s Record That feature allows for recording snapshots of your games. This allows you to save your favorite moments that just happened in your games to your PC, which will allow you to make edits and upload them to your video platform of choice. The real meat of the Xbox app comes with Game Streaming, however. There is one extra requirement if you want to enable Xbox One Game Streaming to your PC. You need to connect an Xbox One controller through a standard USB cable to your PC. If you want, you can also connect the native Xbox One headset as well for voice chat. Your Xbox One audio streams through your computer’s speakers like normal while streaming as well.

Once you turn streaming on, the Xbox app goes full screen and connects to the Xbox One. Depending on your local network, this should only take a few seconds. In my testing, I didn’t see any noticeable delay while navigating the dashboard, although some games did seem to have a slight amount of input lag. For a feature like that’s still relatively new though, I can let it slide.

The actual settings for Game Streaming are relatively straight forward. You pretty much only have quality controls to worry about. These will control how the picture looks – the greater the image quality, the higher the bandwidth used. This is what I was mentioning earlier about needing a decent home networking setup. On the High setting, you can expect to use 10 to 15 mbps on your network (did I mention Microsoft recommends streaming over a wired connection?).

Microsoft has really been stepping up their game on integrating Windows 10 into every facet of their products and making it an incredibly user-friendly experience. So far, I would say they are doing a fantastic job. There are even plans in the works for bringing some of the best features from Windows 10 to the Xbox One, including a new dashboard layout. This should make the Xbox One experience more fluid and much faster, as well as bringing it more inline with the Windows 10 experience on the PC. There is still no news on what features these will bring about. For now, however, being able to stream out Xbox One games and apps to our Windows 10 PC is a great step forward in bringing the experience together into one nice package.